GCR to Mam and Dad

GCR has arrived in Egypt after 11 days at sea in the Mediterranean. Although he couldn’t say from where he was writing this letter, we know that he had landed in Alexandria. (The 4th Battalion was ahead of SS Huntsgreen, the ship GCR traveled on, by one day and Bryn Davies’s diary refers to mooring at Alexandria on 29th July. Also the 50 nurses of the 3rd Australian General Hospital are known to have disembarked at Alexandria between the 30th July and 1st August – http://www.gallipoli.gov.au/nurses-at-gallipoli ).

Back at home, at this time, GCR’s 13 year old brother Dyfan was at a camp in Portmadoc of North Wales. His 16 year old sister, Mailys is expected to take her her Junior exam soon. This is the first we heard of GCR’s siblings. He also comments on his older brother Jon, or Jonathan Roberts, who was 26 at this time. At this time, GCR was in camp, most likely near the docks, in Alexandria; his first experience of the heat and the aggravating flies.

Just a line to let you know that I am alright. Hoping you are all the same. I am still not allowed to tell you where we are only I am somewhere in Egypt at present. We were on the water for 11 days and it was very calm indeed. We called at Malta for a day it is a fine looking place. You can write to me as soon as you like only you must put the same address as when I was in Bedford but instead of Bedford put Mediterranean Expeditionary Force. I can tell you it is very funny to be without a letter for such a long time. Do you know where Jack Jones is … I may have a chance of seeing him. The weather here is very warm except at night when it is nice and cool. We wear light kaki drill uniforms and helmets out here because we would be absolutely roasted. This time last year I was on my holiday if you remember. This time I am having a rather warm holiday. I am short of note paper and envelopes or would write to Jon (GCR’s older brother) tell him so. I wrote to him last week also to you and a PC (Postcard) to Auntie Annie tell him I should like to hear from him. Is Nain Jones down? Give my love to her also Dylan (GCR’s Younger Brother) and Mailys (GCR’s Younger Sister). Has Dyfan been to Portmadoc in camp yet. I expect he has, hope he had a good time. Does he like keeping guard at night. The natives here are a dirty looking mob at least what I have seen of them. They will do you down under your nose. But they can’t do me because I have no money to be done of. They look funny in their baggy pants. How is Hughie Cooper getting on out in France. Give his father my kind regards. Flies are rather a nuisance here but things are not so bad as some like to make them out to be. At least I am not grumbling only I would rather be spending August Bank Holiday at home instead of out here. When you write to me let me know as much as the gossip as you like it will be a pleasure to have a bit of news. I hope your all well, give my love to Mailys, tell her I hope she will pass her junior exam alright, also to Dyfan. At least I could say more but I’m not allowed to. I am in the pink, hope your are all the same I close with the best of love to all.

I am your loving son Goronway

I was talking to a man belonging to the RAMC (Royal Army Medical Corps) yesterday from New Tredegar, at least he was working there before the war as an engineer. He knows Mr. Rees. I do not no his name. 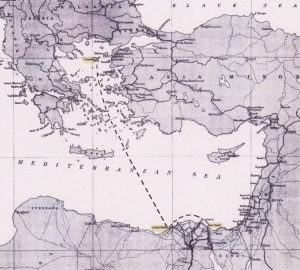 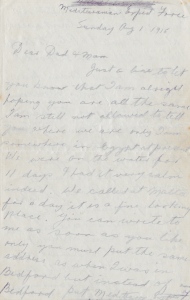