For Bravery in the Field 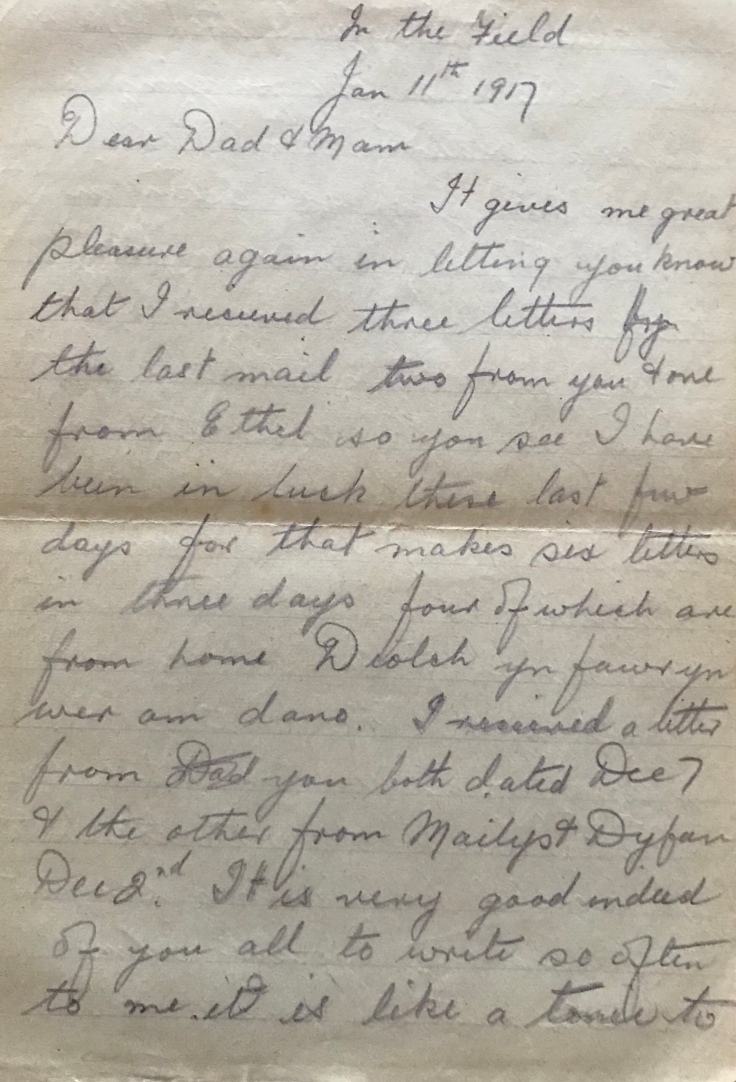 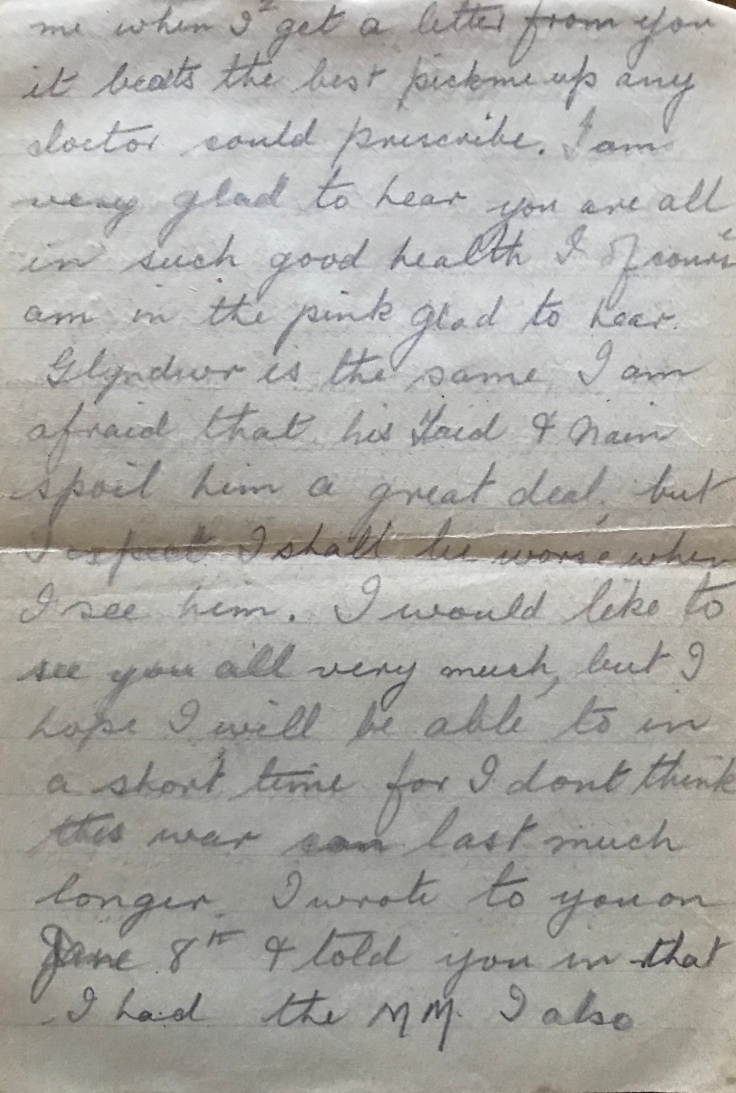 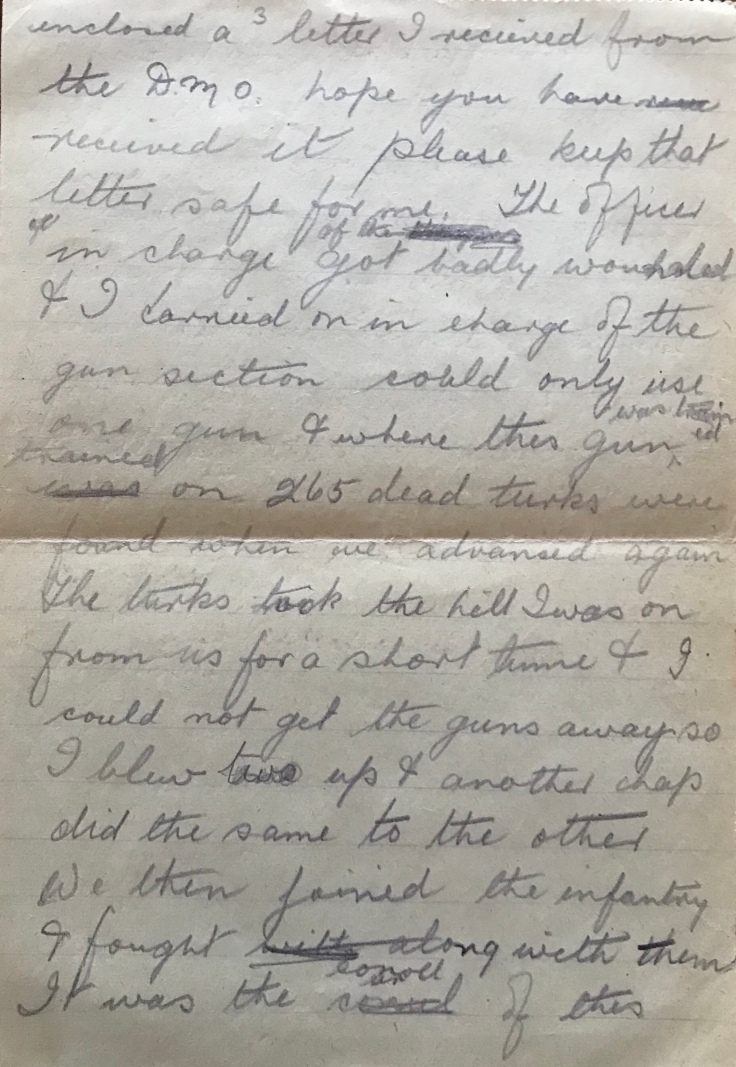 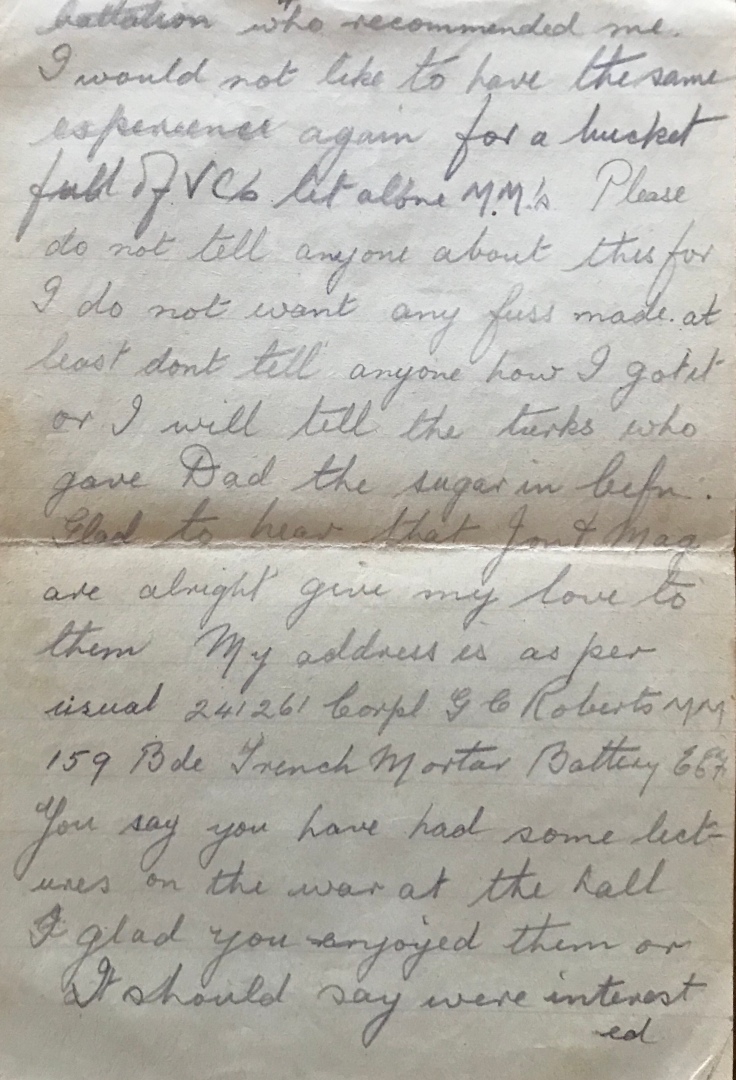 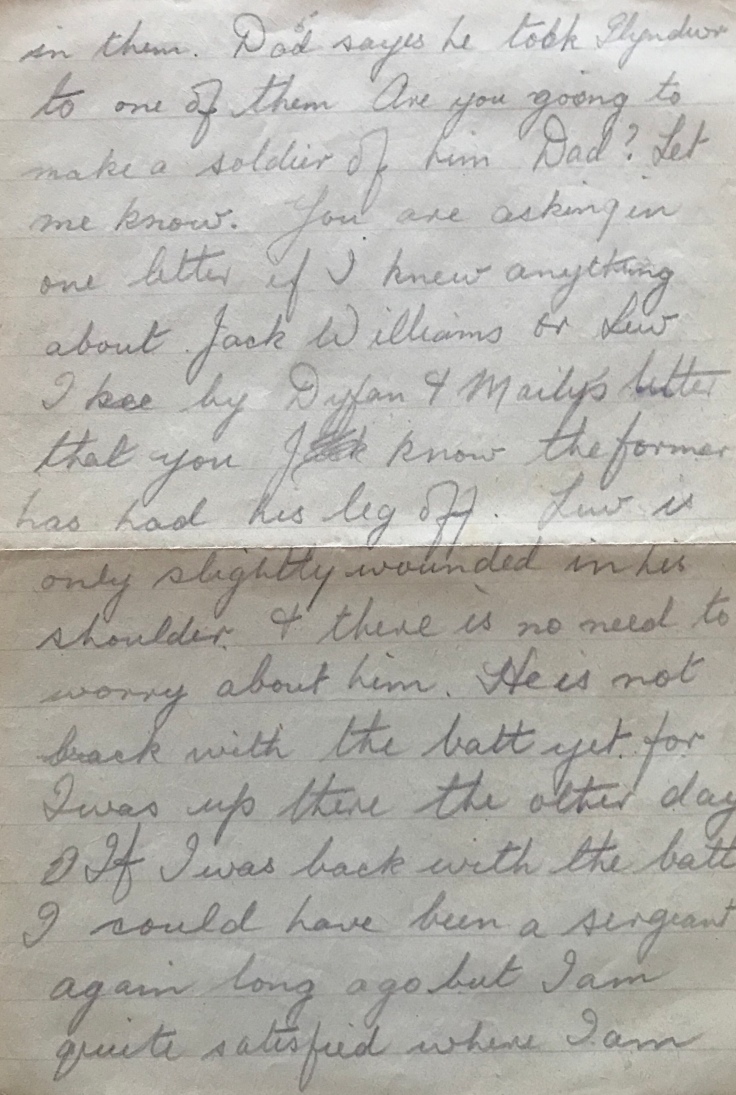 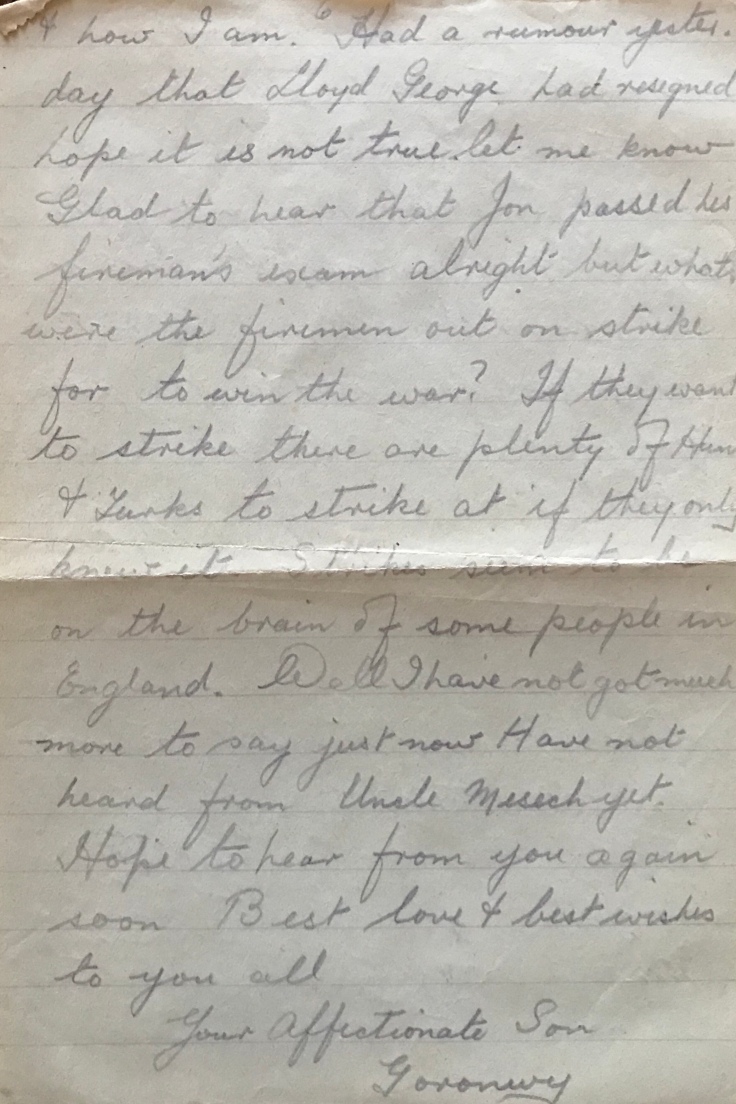 It gives me great pleasure again in letting you know that I received three letters by the last mail two from you and one from Ethel so you see I have been in luck these last few days few days for that makes six letters in three days four of which are from home Diolch yn fawr yn wer am dano. I received a letter from you both dated Dec 7th and the other from Mailys and Dyfan Dec 2nd. It is very good indeed of you all to write so often to me, it is like a tonic to me when I get a letter from you it beats the best pick me up any doctor could prescribe. I am very glad to hear you are all in such good health I of course am in the pink glad to hear Glyndwr is the same. I am afraid his Taid and Nain spoil him a great deal, but I expect I shall be worse when I see him. I would like to see you all very much, but I hope I will be able to in a short time for I don’t think this war can last much longer. I wrote to you on Jan 8th and told you in that I had the MM (Military Medal) I also enclosed a letter I received from the D.M.O hope you have received it please keep that letter safe for me. The officer in charge of the ———- got badly wounded and I carried on in charge of the gun section, could only use one gun and where this gun was trained on 265 dead Turks were found when we advanced again. The Turks took the hill I was on from us for a short time and I could not get the guns away so I blew two up and another chap did the same to the other. We then joined the infantry and fought along with them. It was the colonel of this battalion who recommended me. I would not like to have the same experience again for a bucket of VCs let alone MMS. Please do not tell anyone about this for I do not want any fuss made at least don’t tell anyone how I got it or I will tell the Turks who gave Dad the sugar in Cefn. Glad to hear that Jon and Mag are alright give my love to them. My address is as per usual 241261 Corpl GC Roberts MM, 159 Bde Trench Mortar Battery EEF. You say you have had some lectures on the war at the Hall. I’m glad you enjoyed them or I should say were interested in them. Dad says he took Glyndwr to one of them. Are you going to make a soldier of him Dad? Let me know. You are asking in one letter if I knew anything about Jack Williams or Lew. I see by Dyfan and Mailys’ letter that you know the former has had his leg off. Lew is only slightly wounded in his shoulder and there is no need to worry about him. He is not back with the batt yet for I was up there the other day. If I was back with the batt I could have been a sergeant again long ago but I am quite satisfied where I am and how I am. Had a rumour yesterday that Lloyd George had resigned hope it is not true let me know. Glad to hear that Jon passed his fireman’s exam alright but what were the firemen out on strike for to win the war? If they want to strike there are plenty of Huns and Turks to strike at if they only knew it. Strikes seem to be on the brain of some people in England. Well I have not got much more to say just now. Have not heard from Uncle Mesach yet. Hope to hear from you again soon. Best love and best wishes to you all.

The action described in this letter occurred during the Turkish counterattack on Jerusalem that took place 26th/27th December and was decisively beaten back. GCR destroyed the mortars by throwing a bomb down the tubes the wrong way causing them to explode. Although he jumped clear, he was completely buried in the explosion and although, from the letter, it is clear that he was able to carry on the fight, this incident contributed to the claustrophobia from which he suffered for rest of his days.

His parents did look after that letter from the DMO (Divisional Mortar Officer); it is transcribed below. 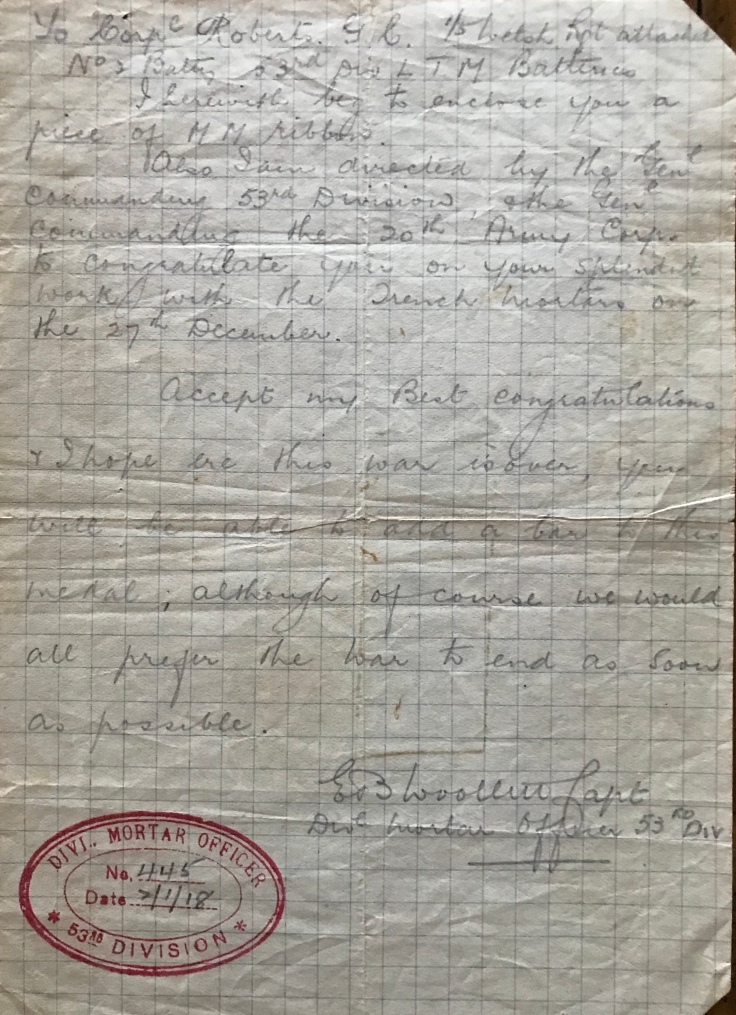 I herewith beg to enclose you a piece of MM ribbon. Also I am directed by the Gen Commanding 53rd Division and the Gen Commanding the 20th Army Corps to congratulate you on your splendid work with the Trench Mortars on the 27th December. Accept my best congratulations and I hope ere this war is over, you will be able to add a bar to the medal, although of course we would all prefer the war to end as soon as possible.

The Military Medal (MM) was a military decoration awarded to personnel of the British Army and other services and formerly also to personnel of other Commonwealth countries, below commissioned rank, for bravery in battle on land.

The medal was established on 25 March 1916. It was the other ranks equivalent to the Military Cross (MC), which was awarded to commissioned officers and, rarely, to warrant officers. The MM ranked below the Distinguished Conduct Medal.