It gives me great pleasure to be able to tell you that I received two envelopes containing letters from Dad dated July 25 and from Mam, Mailys and Dyfan dated July 15th. I have no need to tell you how glad I was to get them. I received them yesterday so you see I am making haste to answer them. I was very thankful to hear that you are all in good health. That’s the style. I am glad to tell you I am still A1 and in the pink. Glad to hear that all the allotments at Abertysswg are getting on so well no doubt they will be of great help to everyone. I should say it was rather a compliment to Dad for Mr Blake to say he had not seen any better allotments than those at Aber for Dad was the pioneer of the scheme at Abertysswg so I understand from one of your letters. Dad is asking what my rank now is, well I am now corporal and am quite satisfied because I am much better off with the battery as corp than if I was sergeant in the battalion. So please do not send to anyone about it. It would be of no use Kings regulations are I.T. in the Army. If I was with the battalion I should have had my rank back but I am glad I am not for I do not want it. You are also asking how I did in the trench mortar course I had, well I had 96 in the exam out of 100 so that is no so bad in fact it’s a distinguish. I wrote and told you about it long ago but you could not have got the letter. I am very glad to hear that Mam is going for a holiday to Swansea I hope she will enjoy herself thoroughly for it will do her good. It’s high time Mam had a little run around. I should like to see her cutting a dash on the Mumbles I bet she can beat many a one in the shade still if she likes. But in my estimation I don’t think there is anyone a patch on Mam bach. I won’t be sorry when the time comes for peace to be declared and I can come home again and then I hope to have  a holiday with you all as long as you will have me anyway. By Jove you must both be very proud of Glyndwr getting the prize as a sensibly dressed baby and I am sure Mag and Jon are. I hear you are having pretty hot weather so are we and I am sweating trying to write this letter. I hope Mailys  and Dyfan will pass their exams with flying colours. I hope Dyfan will not be so daft as to want to leave school yet especially as he has a chance to stay. It will be a great thing for him if he passes his matriculation for if he does that it will help him to get many a good job. I wish I had not been so dull now. I think a half educated man is a dangerous person because he thinks he knows things when he does not. He is worse than a man who has had no education at all. I consider myself the daft one of the family but if Dyfan does not stick to school and do his best I will be loosing my position tell him so. I am going on another course next week trench warfare this time. I will have a try at passing out if I don’t I will eat my helmet and bray. How much longer do you think this war will last, let me know, I have no opinion of my own. I saw a piece in the paper that some miners trade union were protesting against the action of the Seamen’s Union and Captain Tupper in not allowing Ramsey McDonald to go to Russia. What are they trying to do Do they want to chuck in the sponge it seems like it. They would have been more of men if they had said bravo to the Seamen’s Union and Capt Tupper. R McDonald is a disgrace to Scotland. What do you think of him. Lewis Morgan is quite alright and wishes to be remembered to you he has gone down to the rest camp for a week. I have not seen B Fry for some months will let you know when I see him. I have no more to say just now will write again soon. Best love and best wishes to you all. Address as usual.

After the overthrow of the Tsarist government in Russia, socialists all over Europe took up a Russian suggestion of a conference in neutral Stockholm to discuss a compromise solution to end the war. Ramsay MacDonald, former leader of the Labour Party and a well known pacifist was to attend the conference. This did not go down well with much of the country including the Seamens Union, who felt too much sacrifice had been made to “throw in the towel”. The ships crew, rallied by the firebrand union agitator Captain Tupper, refused to sail with the socialist party on board and MacDonald was prevented from leaving the UK.

Tupper had claimed to be a Captain, to have won the VC and to have trained for the priesthood. None of this was apparently true. He made his name during the 1911 seamens strike. 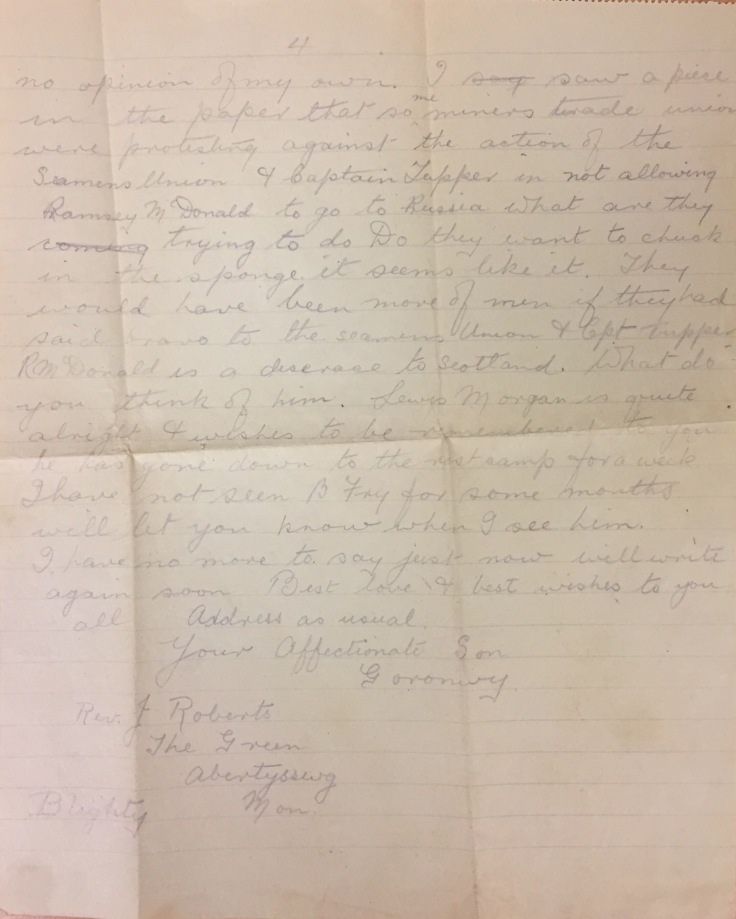