Just a line again to let you know that I am as per usual in the pink hope you can say the same at home. I received a letter from Mailys and Dyfan by the last mail and was exceedingly pleased to get them. I also received a letter from Auntie Polly. I have written in answer to both letters hope they have received them by now. I wrote to you three days ago hope you have received that letter safe by now because if I know you are getting my letters alright it’s half the battle. I see by Mailys and Dyfan’s letters you have had the Sunday School walking out hope everybody enjoyed themselves and that it was a success. I should like to have been there very much for we always used to have plenty of fun over it. I am living in hopes of being home for the next one. Do you know it was two years yesterday I got wounded on Sulva time has gone don’t you think so. I did not bargain on being out here so long when I came out and i don’;t think anyone else did either. Roll on the day when i can come home again. I think this war has dragged on for far to long already don’t you think so, but all the same I am willing to do a few more months to see us winning. I intend to tie myself by the fastest knot I can get to Mam’s apron strings when I come home and if anyone says anything to me about it I will try my best to severely hurt him. I am only 13 stone now when I weighed a week ago and I guess if I stepped on someone’s toes it would hurt don’t you think so. I heard today that the munition workers in England are having a week’s holiday. Well if that is correct it is good news for it proves we have things well in hand now. Let me know if it correct would like to know very much. How is Jon and Mag and Glyn getting on because I don’t now if they are alive or not. I have not had a letter from them for a long time and I know I wrote last. If they find it too much trouble to write well and good one less for me to write to that’s all. Hope you don’t think me peevish or anything of the kind but I do not think much of them for not writing it’s the least they can do. Just fancy I will be twenty one in October I wish I could come home for my birthday with Mam. It would be alright don’t you think so. I would be quite willing to go anywhere they would like to send me only let me have a leave home first. When do you think this war will end let me know. The weather here is still very hot but it does not effect me in the least now. My skull must be as thick as a nigger’s, as you know it always was a bit thick.  My address is 241261 Corpl GC Roberts 159 Bde Trench Mortar Battery EEF. I have not yet received a letter with my new address on yet so by going to the batt my letters are delayed for about four days. I am still in the line and we are not so bad off and don’t grouse for there is nothing to grumble about but take my chance with everyone else. How is Abertysswg getting on now hope it’s still in the same place. I had a letter from Roberts the Co-Op he tells me he is class C1 I told him I was A1 will a capital A at that. He told me he was appealing for exemption at the Rhymney tribunal. I am not sorry even now I joined up because I can call myself a volunteer and not a Derbyite or conscript or a C.O. People in Blighty seem to think a lot more of the Derbyite and conscripts treat are coming up now than they do of the men who came up first. But all’s well that ends well. So the sooner this is over the better. I must wind up now with Best love and best wishes from 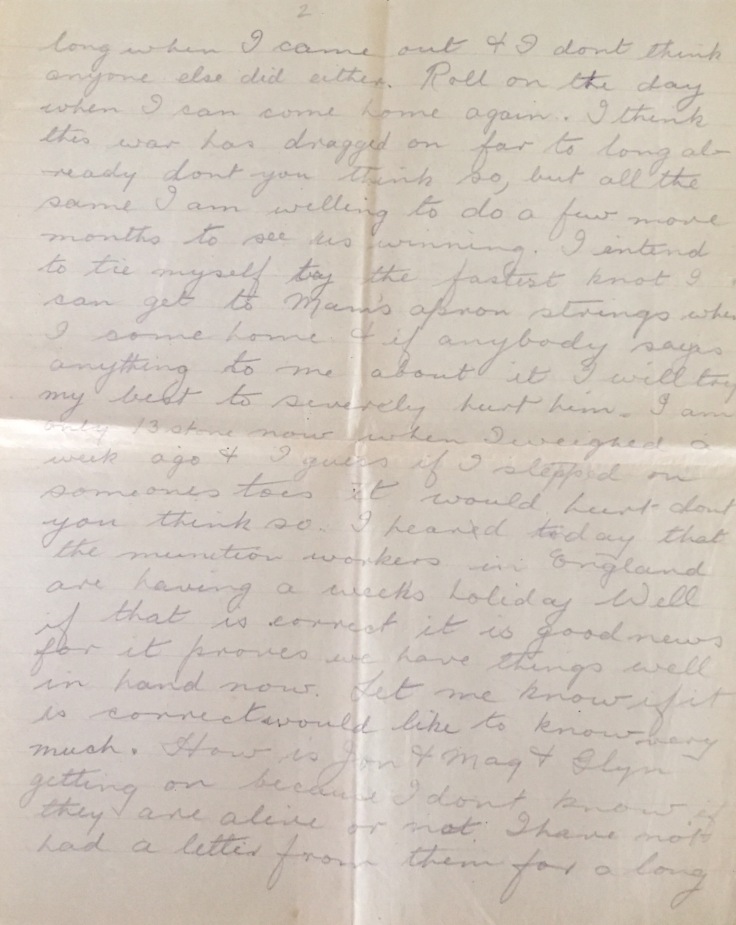 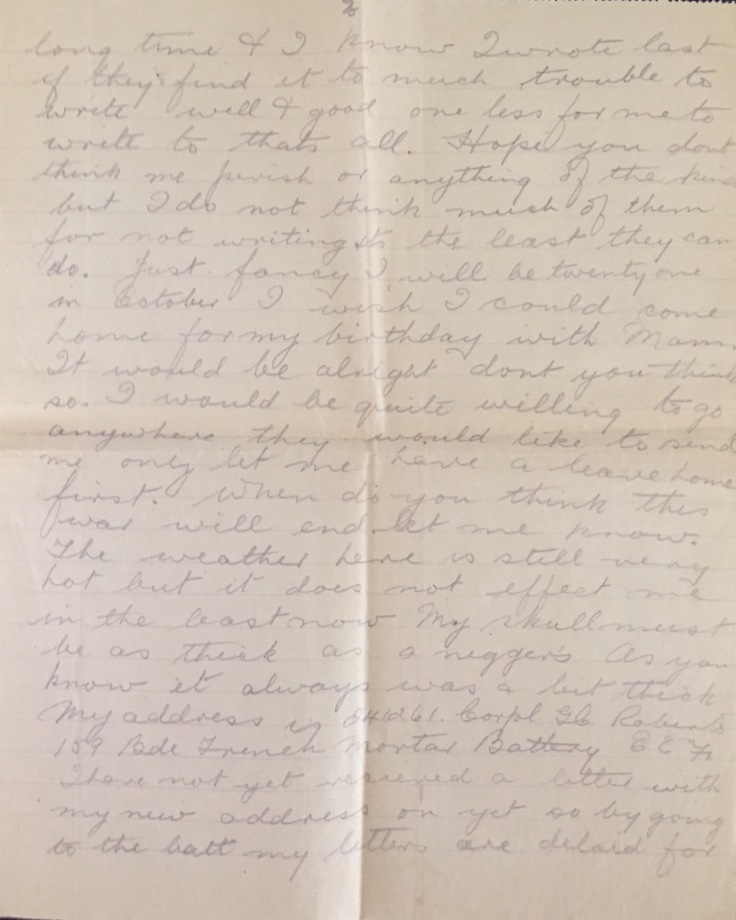