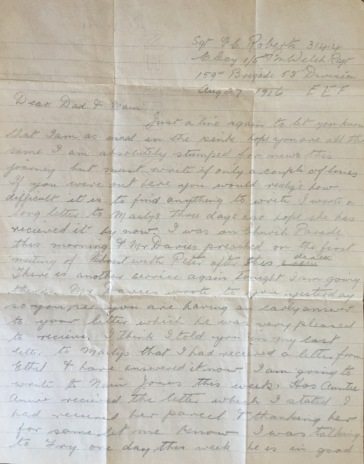 Just a line again to let you know that I am as usual in the pink, hope you are all the same. I am absolutely stumped for news this journey but must write if only a couple of lines, if you were out here you would realize how difficult it is to find anything to write. I wrote a long letter to Mailys three days ago. Hope she has received it by now. I was on Church Parade this morning and Mr Davies preached on the first meeting of Christ with Peter after his death. There is another service again tonight. I am going there. Mr Davies wrote to you yesterday so you see you are having an early answer to your letter which he was very please to receive. I think I told you in my last letter to Mailys that I had received a letter from Ethel and have answered it now. I am going to write to Nain Jones this week. Has Auntie Annie received the letter which I stated I had received her parcel and thanking her for same, let her know I was talking to Fry one day this week. He is in good health and wishes to he remembered to you. He does not look any the worse for being in the army. In fact he is getting quite fat over it.
Aug 28
I am going to finish this letter today. I had to leave it yesterday but it could not be helped, parades must be done. I am very pleased to be able to tell you that I received a letter from Mailys and Dyfan dated August 13th, was very pleased to get it, many thanks to both of them. Mailys is getting very descriptive in her letters indeed with her diagrams etc. If she drew diagrams like that in the Central Welsh Board Ex she will get six months hard labor, what an awful fact. Glad to hear Geo Perry is home and getting better. Tell Dyfan that the Pengam Cadet Corps has appeared in the army list. Does he belong to them or the scouts? Well I hope you are all in good health, I must close now with best love and best wishes to you all.
I am
Your loving Son

This is the first mention of an Ethel; it may be that this was his future wife, our grandmother, Ethel Ada Pritchard. More likely however it was Ethel Burgess his cousin who would have been 17 at the time. (Thanks to Dylan Burgess for this suggestion)