Lc Cpl GC Roberts 3144
C Company
1/5th Welsh Regt
159th Brigade 53rd Division
May 5 1916
Dear Dad and Mam
I am again writing to you to let you know that I am as usual hope you are all the same at home. I have not written to you for about five days but that was owing to us moving again. We have shifted from a place called Wardan about forty miles from Cairo to where the Duke of Westminster made his attack on the Arabs and rescued the sailors. I expect you saw an account of it in the paper. We are by the seashore now have just had a bathe it was glorious I shall be in the sea as much as possible now. I have not had a letter from you for about a week so you can see that I am anxiously waiting for the next mail. We have just heard that the French have made another advance hope it is correct. We have refugees coming in everyday old men women and children it is a pity to see them. They are starving. The enemy is looting their villages such as they are and they has to get out of the way. So the British Government has to feed them. We capture enemy stores nearly every day. _______________ I have just rubbed the above out myself. I received the kit bag I left in Alexandria last July on the way to the Dardanelles back today but I only had my purse and an American cent piece I had in it back. We are not doing so bad here have done a lot worse many times. We have a fine recreation tent here so that we can write our letters and read the latest in quiet. It is run by the chaplain. Hope to hear from you soon now have not received the parcel yet but will most likely do so next mail. I must close now with best love and wishes to you all.
I am
Your loving Son
Goronwy 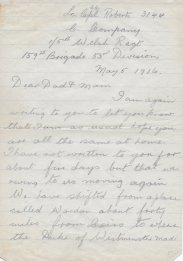 The reference to the Duke of Westminster and the rescue of the sailors refers to the actions of the Western Frontier Force campaign against the Senussi, nomadic tribes loyal to the Ottomans and equipped and led by the Turks, who had been attacking British Egypt from the west. In March 1916, it was discovered that the captured crews of the British ships Moorina and Tara were being held by the Senussi, 75 miles west. The Duke took his Rolls Royce armoured car battery and dashed off, covering some 120 miles in hostile territory without support to Bir el Hakim (Bir Hakkim), rescued the prisoners without loss of life.

So before April 30th GCR and 159 Brgade were located in Beni Salama on the Wadi Natrum in the Wardan area north west of Cairo. Between 1st and 5th May they had been moved from there to Sollum if not Bir Hakeim itself. The enemy he refers to would be the Senussi.