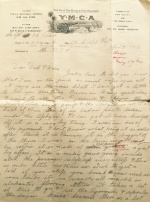 Just a line to let you know that I am in the pink as usual hope you all at home are the same. Well I have got a little to tell you this time. I was in Cairo yesterday and went to see the Pyrimids and Sphynx. There are three pyrimids in a group and the Sphynx is at the back of them. Ten of us had our photos taken under the Sphynx. It has got its nose knocked off it is a very big thing. I was in one of the pyramids I don’t know what king it is called after, think it is Ramsey. It is the biggest of the three. I was in the kings room and saw his coffin it is made of one piece of granite a great big affair.It is a risky game going inside atall the passages slope very steep and there is only little notches in which to get a hold, if you slip you break your neck and some limbs it is nearly all marble or alabaster flooring. It takes a lot of time to go and seee the Pyrimids and spoils the day in Cairo because there is a lot of mucking about to do, but once seen you don’t want to see them again. We returned from the Pyrimids about two pm and went and had some dinner. After that we went to aee the Blue Mosque. This mosque is seven hundred years old. It is a very big building with a dome and spires. We went inside and saw the tomb of some king or other don’t know his name. The ceiling of the mosque was beautiful it was all ornamented in blue and gold fine work. There were some Egyptians in there at the time say(ing) prayers and reading from some book they had. They didn’t half jabber. We had to put on great big slippers over our boots because the mosque is sacred. The Egyptians go in bare footed. After being (going) to the mosque we went to the silk market there was not much to be seen there, only people selling silks and embroideries. It was Jonny buy this and Jonny buy that. We are all Jonnies in Egypt. We call the natives Jonny and they call us the same. We returned to our camp by the five train. I can tell you I was pretty tired when we came back. . I will send you the photo when I get them. I am only having three so I will send you two so you can give one to Jon. Tell Mailys to send me hers when she gets them. You will no doubt that I am no longer a private but have got a dog’s leg as they are called. Was promoted on the 19th. I am lucky enough to be paid for it some don’t get paid for it for a couple of months. So you see I have been a good child since I rejoined the batt. Tell Dyfan he shant bownce me any more or I will put him in the jug for insolence to an NCO.

Well I have no more to say now have not had a letter from you since last Sunday but I must not grumble I had three all at once. You will perhaps remember that I was home on leave from H’west (Haverfordwest, Pembrokeshire) twelve months from now. Lew Morgan is alright. Well so long hope you are all in the pink.

With best love and wishes to you all

Had a donkey ride round the pyrimids, The donkey’s name was Moses. No wonder the Israelites were forty years in the desert if their donkeys could not go quicker than Moses.