Just a line to let you know that I am as usual in the pink although I am rather tired just now, have just come in of a route march in the desert. I hope you all at home are in the best of health. I wrote to you on the 31st of last month a long one hope you have received it before this. On in Sunday morning I was at the nonconformist parade and the chaplain made the announcement that he had some shirts and sock to give away. Well I went and got a shirt from him and a pair of socks, a decent one at that. Well before he gave me the shirt, I had only one to my name, somebody pinched the other one I had. Well in the evening, I was too late to the last of the YMCA mission meetings. They have been very successful and much good has been done. One evening last week a friend of mine another Roberts and Bernard Fry and myself went to the coffee shop and had a good feed and I was full to the top by when I had finished. I have not got much to say this time. I have put my name down for a job of storeman with the Royal Engineers don’t know what will become of it may fall through. Have not set my mind on it so I will not be disappointed if nothing comes of it. It is very hot out here now. We have to parade in shirt sleeves now it being to hot to wear tunics. Has Jon been called up yet, what is he going to join when he does get called. Give my love to Mag and Jon hope they are both in the best of health. Hope Dyfan and Mailys are alright. I have not received a letter from you for about a week now but am expecting one every mail. I hope the weather has improved at home by now. I wrote to Auntie Annie and Nain Jones the same time as I wrote to you last time, also to Jon. Hope they have had them if you don’t know weather they have had them or not, please make enquiries. I must close now with best love and wishes to you all.
I am
Your loving son
Goronwy

The Bill which became the Act was introduced by Prime Minister H. H. Asquith in January 1916. It came into force on 2 March 1916. Previously the British Government had relied on voluntary enlistment, and latterly a kind of moral conscription called the Derby Scheme.
The Act specified that men from 18 to 41 years old were liable to be called up for service in the army unless they were married, widowed with children, serving in the Royal Navy, a minister of religion, or working in one of a number of reserved occupations. A second Act in May 1916 extended liability for military service to married men, and a third Act in 1918 extended the upper age limit to 51.
Men or employers who objected to an individual’s call-up could apply to a local Military Service Tribunal. These bodies could grant exemption from service, usually conditional or temporary. There was right of appeal to a County Appeal Tribunal.
https://en.wikipedia.org/wiki/Military_Service_Act_1916 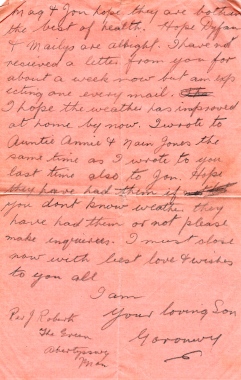