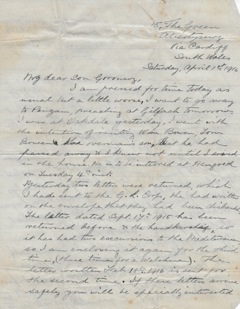 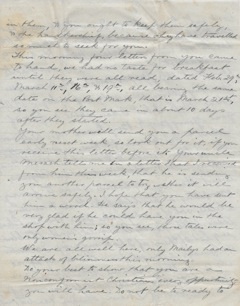 I am pressed for time today as usual but a little worse, I want to go away to Pengam, preaching at Gilfach tomorrow. I was at Oakdale yesterday, I went with the intention of visiting Wm Bowen, Tom Bowen the overman’s son but he had passed away and I knew not until I arrived in the house. He is to be interred at Hengoed on Tuesday 4th —–.

Yesterday two letters were returned, which I had sent to the G.L.Corps, they had written on the envelope that they had been disbanded. The letter dated Sept 17th 1915 has been returned before and the handkerchief, so it has had two excursions to the Mediterranean so I am enclosing it again for the third time, (three times for a Welshman). The letter written Feb 18th 1916 is sent for the second time. If these letters arrive safely you will be specially interested in them, and you ought to keep them safely because they have traveled so much to seek for you.

This morning four letters from you came to hand, we had no taste for breakfast until they were all read, dated Feb 29th, March 11th, 16th and 19th, all bearing the same date on the Post Mark, that is March 21st so you see they came in about 10 days after they started.

Your mother will send you a parcel early next week, so look out for it, if you receive this letter before it. Your uncle Messach tells me in a letter that I received this week, that he is sending you another parcel to try whether it will arrive safely. I hope that you have sent him a word. He says that he would be very glad if he could have you in the shop with him; so you see, those tales were only women’s gossip.

We are all well here, only Mailys had an attack of biliousness this morning.

Do your best to show that you are a Nonconformist Christian every opportunity you will have. Do not be too ready to do without the priviledges that Nonconformists have fought so hard to gain them. It is by keen striving that the Free Church Chaplains are got into the army even now, too many recruiting officers are doing their best to register all that enlist as C.E. From all that I see and hear some of the finest manhood under arms at the present time are those brought up in the Free Churches.

We have had a very heavy fall of snow at the beginning of this week, one of the heaviest I remember, it was a terrific storm. The trains throughout the country have been hours late, the B&M.R and the R.R. failed to run at all one day. Telegraph poles have been broken like carrots, communications have been disorganised every where, but things are coming into shape again. You will see that you have escaped this storm and enjoyed fine weather. Look after your eyes by taking care of your glasses.

I must conclude with best wishes and kindest regards from every one here.

I am your affectionate father

This letter from GCR’s father is in the collection because GCR later used the unused sides of the pages to write another letter home on June 24th.