This first letter from Goronway (GCR) was written on a transport ship somewhere in the Mediterranean probably just after passing the Island of Malta (We deduce this by reference to the diary of another Welsh soldier, Bryn Davies, of the 4th Battalion which sailed one day ahead of the 5th). The 5th Battalion was on the SS Huntsgreen.

“SS Huntsgreen was orginally a German ship called the DERFLINGER. She was a 9060 gross ton ship, length 463ft x beam 57.7ft, one funnel, two masts, twin screw, speed 14 knot. Accommodation for 104-1st, 104-2nd and 1,919-3rd class passengers. Built by F. Schichau, Danzig, she was launched on 9th Nov.1907 for North German Lloyd, Bremen and started her maiden voyage from Bremen to New York on 9th May 1908. After this voyage, she was used on the Bremen – Suez – Far East service until 1914 when she was captured by the British at Port Said. Renamed HUNTSGREEN and operated as a troopship.

The Welch/Welsh Regiment embarked at Devonport under “sealed orders” sailing east to Alexandria aboard “SS Huntsgreen” The voyage east was uneventful, with the exception perhaps, of the list which developed as a result of being so hurriedly despatched as to allow no time for the cargo to be properly stowed. http://www.roll-of-honour.com

Also sailing on the Huntsgreen were 50 nurses from the No. 3 Australian General Hospital; before long these nurses were to play a role in GCR’s story. 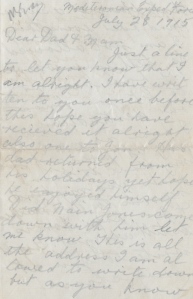 Just a line to let you know that I am alright. I have written to you once before this hope you have received it alright also one to Jon. Has Dad returned from his holidays yet hope he enjoyed himself. Did Nain Jones come down with him let me know. This is all the address I am allowed to write down but as you know my regiment you will be able to write to me alright hope to hear from you soon.

We are having lovely weather and the sea is like a mill pond. I feel in the pink hope you are all the same. Give my love to Mailys and Dyfan. I have seen a bit of the world already and it is wonderful how fine everything looks. It proves that there is a Supreme Hand over everything. I am not allowed to tell you where we have been or to let you know our destination.

I have no more to say at present. Give my love to Nain Jones also my kind regards to Mrs Davies and Jim, hope Tom is still alright. I will write to you at every chance I have. Mind you don’t keep worrying about me because if I knew that it would be no encouragement for me. I must now close hope you are all in the best of health.